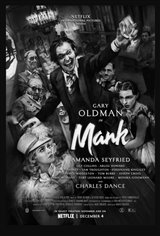 In the 1930s, screenwriter Herman J. Mankiewicz (Gary Oldman), a.k.a. Mank, is nursing a broken leg at the North Verde Ranch outside of Los Angeles. While resting there, he's working on a script for an upcoing movie that will be known as Citizen Kane, while struggling with his alcoholism.

Orson Welles (Tom Burke), 24, who has been given carte blanche by RKO Pictures to make any film he wants, gives Mank a deadline of 90 days to produce a first draft, with the provision that Mank will get no credit—only Welles' name will appear as the writer of the screenplay.

Flashback to a few years earlier, as Mank hangs out at William Randolph Hearst's estate and becomes friends with starlet Marion Davies (Amanda Seyfried), who is Hearst's mistress. He also works with legendary producer Irving Thalberg (Ferdinand Kingsley) and movie mogul Louis B. Mayer (Arliss Howard). All of his earlier experiences find their ways into the Citizen Kane screenplay, which will go on to be considered one of the greatest movies of all time.