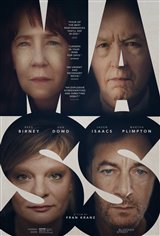 Six years after a school shooting tore their lives apart, Jay (Jason Isaacs) and his wife Gail (Martha Plimpton), who lost their son that day, agree to talk privately with Richard (Reed Birney) and Linda (Ann Dowd), whose son committed the horrific act.

They get together in a church antechamber, in an attempt to move forward. Gail and Jay want to know if in hindsight, was there anything about the other couple's son that they saw as a red flag? It's clear that the boy was bullied and troubled, but they want to know more about why he went on to commit the act that took their son's life.

Linda and Richard reveal they'd moved with their son from a rural setting to a suburban one, and wonder if that was the mistake that led to the fateful day. But they can't be certain, and struggle with the possibility that they might have been able to anticipate what he was planning.