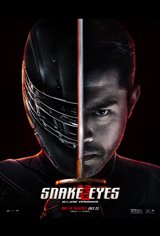 When the mysterious loner and fighter Snake Eyes (Henry Golding) is forced to kill Tommy Arashikage, he refuses and instead helps him escape. To repay the act of mercy that saved his life, Tommy takes Snake Eyes back to his home where he reveals the secrets of the Arashikage clan, an order of ninjas meant to protect the world. The Arashikage teach Snake Eyes the ways of the ninja warrior.

Joining their ranks, Snake Eyes begins taking on missions for the clan, but soon finds his loyalties tested when secrets of his past are revealed, putting him at odds with Tommy. Snake Eyes' honor and allegiance will be tested — even if that means losing the trust of those closest to him.