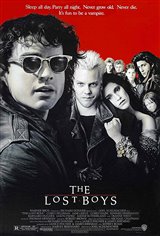 Lucy (Dianne Wiest), a recently divorced mother with two sons, Michael (Jason Patric) and Sam (Corey Haim), moves to the small town Santa Carla, California, to live with her father (Barnard Hughes). The town has a number of missing people, as evidenced by the many flyers on the boardwalk.

Michael is drawn to a young woman named Star (Jami Gertz), who seems to be in a relationship with David (Kiefer Sutherland), the leader of a gang of young bikers. For his part, Sam meets two boys his age, Edgar (Corey Feldman) and Alan Frog (Jamison Newlander), who tell him they're vampire hunters.

David invites Michael to join the gang after an initiation that includes drinking something from a bottle, even though Star warns him not to, telling him it's blood. Soon after, Michael becomes sensitive to sunlight and displays other behavior that leads Sam to believe Michael is turning into a vampire.