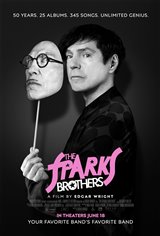 Filmmaker Edgar Wright chronicles the five-decade long career of the enigmatic music duo Sparks, a pop-rock icon made up of brothers Ron and Russell Mael. Little was known about Ron and Russell by the musicians and fans that idolized them, but Wright’s documentary looks at how the Sparks brothers inspired modern pop and rock from the shadows.

Musicians Beck, Flea of the Red Hot Chili Peppers, Fred Armisen of Franz Ferdinand, Jane Wiedlen of The Go-Go’s, Thurston Moore of Sonic Youth, and more all features in the documentary-biopic.